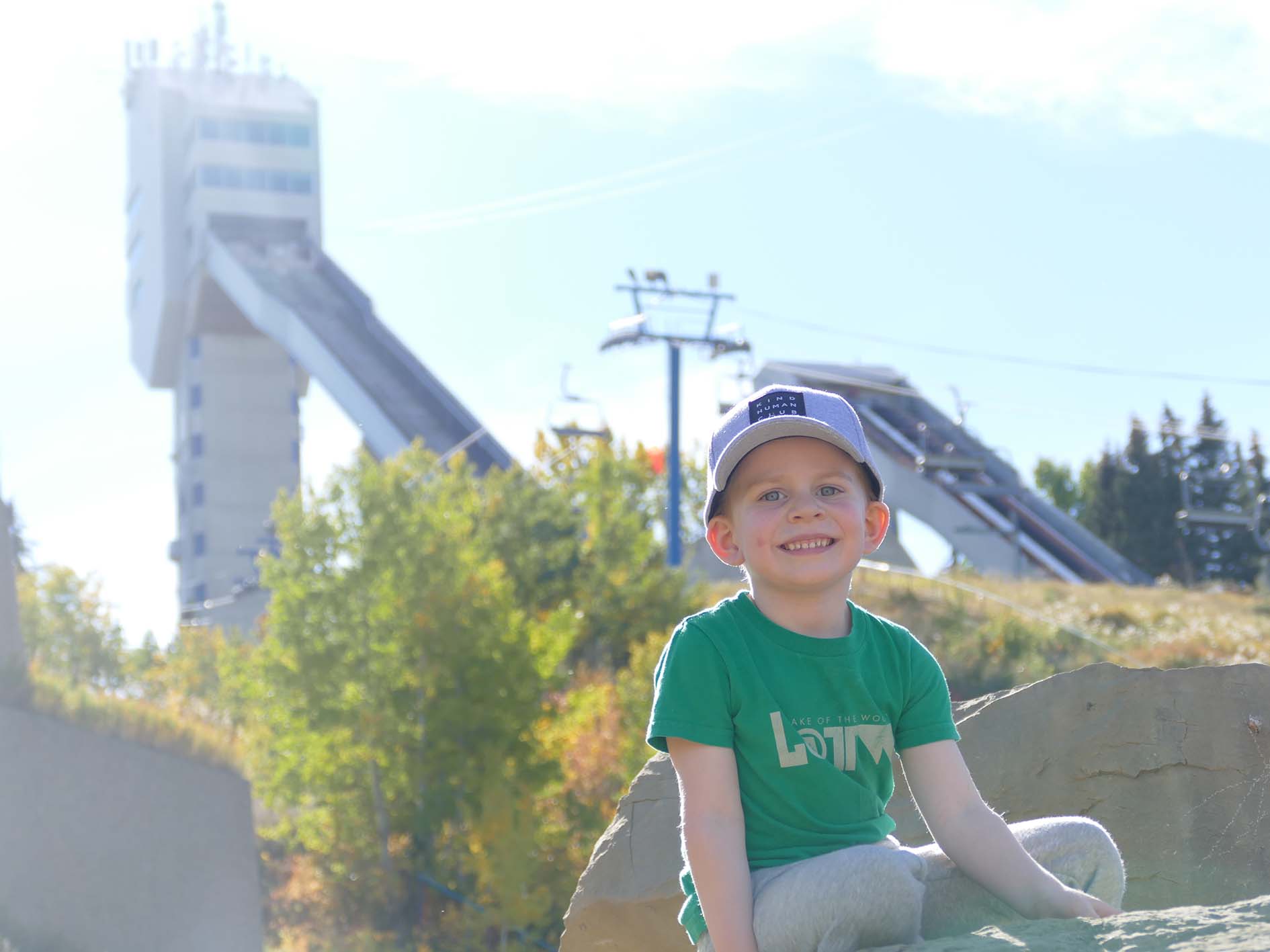 Nowadays, being able to get kids outdoors to explore, ask questions, and have fun is crucial to help with not only development, but also to reduce the time spent behind a screen.

WinSport’s Wilderness Explorers Program for kids aged three to seven looks to do just that.

This week, we had the chance to dive right into the program and join the kids on their journey to see exactly what they got to learn.

As the camp-goers made their way from WinSport’s Day Lodge to the final destination within the trees near the foot of the ski jump, a snack was necessary. But it wasn’t just a stop to eat.

As kids do, there were some rocks and a nice puddle. These two things combined make for a fun, and messy, time. As some kids packed up their snack, others made their way to the puddle to test the absorbency of their shoes and socks.

Then we were off!

We made our way along the trail that wraps around the backside of the Monster Zipline tower and continued our climb.

It became clear who the adventurous ones in the group were, attempting to run up the open path to see just what comes next.

This led us to a nice big group of rocks with a tent in the middle. It’s the perfect spot for kids to play, explore, and use their imaginations to just have fun.

Having fun while learning some early life lessons are the main goals for the camp according to the person who helps run it, Hanna Schulze.

“As a leader of this program, my goal is to get kids stoked about the outdoors from a young age,” she said.

“We embrace the outdoors; with small class sizes and passionate leaders we can fully immerse ourselves in outdoor play and learning,” Schulze explained. “Through intentional and adventurous child led play, our leaders focus on allowing children to prove to themselves, and the world, that they are capable members of society.”

That’s where the rocks come in. Being able to try new things carefully and under the supervision of camp leaders, it helps kids bring out a side of them they may have not explored previously.

Immediately upon arriving at the rocks, one participant took the lead on driving the “boat” at the head of the rocks. And all the kids followed.

As they steered the boat, the kids slowly found other activities that caught their eye.

Some began taking rocks and drawing pictures on other rocks, while others decided to test their rock climbing skills.

The rock climbing was a big learning moment for some of the kids. On the outside, it’s just kids climbing rocks. But when you really look at it, you’re finding kids who were battling confidence issues in the activity but were able to overcome it to keep climbing. 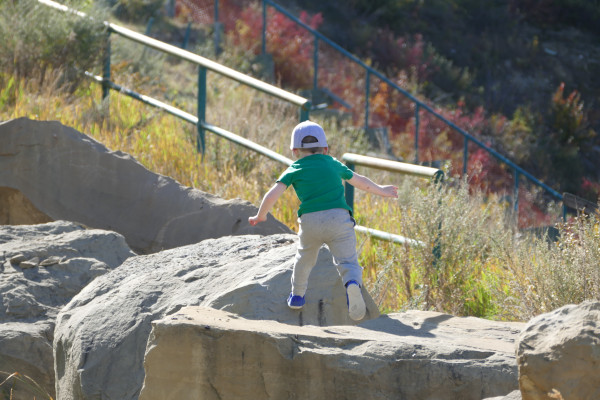 Others were just natural climbers and were able to help those who may have got stuck at some parts.

“We learn risk assessment when we check in with our bodies as we climb rocks,” explained Schulze. “We practice our concentration and self-regulation through nature. We have found that a lot of our participants learn and practice their communication skills with each other and their leaders.”

As most of the kids climbed their way across the rocks, there was one who took their exploration and creativity a different route.

She took a series of 10-15 rocks, all of varying sizes, and made a drum set out of the different sounding ones. She then found a stick and began drumming away.

It was a true testament to just how creative kids can get when you put them in the right spot to explore that side of them.

“Nature brings us together; through its regulatory capabilities, it helps us tune into our body. This is incredibly important for everyone and especially post covid.

“For a lot of the children in this program, it is some of their first experiences socializing outside their immediate community. Play in nature removes any boundaries and easily allows children to make new friends and connections,” said Schulze.

As the kids reconvened, they began making “cakes” with the rocks and through tossing some of them around one of the kids got a little too close to another. This became a teaching moment and after being told he needed to apologize, you got to see that communication really come out as the apologies and forgiveness took place with no extra help needed from Hanna.

Both kids then forgot what had previously happened and they both hopped back into playing together.

These Wilderness Explorer camps, and Outdoor Adventure camps as a whole, help teach these kids more than just how to play on rocks and jump in puddles.

It helps them explore their creative minds in an area where they can make mistakes and learn from them.

It’s an incredible opportunity to put kids in an environment outside of a classroom where they can learn and just be themselves.

We talked a lot about the in depth positives of these camps for kids. If you want to learn more about how the weather plays a factor in these camps and just how dynamic they really are, check out our Outdoor Adventure blog!

There is still room in our Fall Wilderness Exploreres programs beginning in October! To sign up, click here. 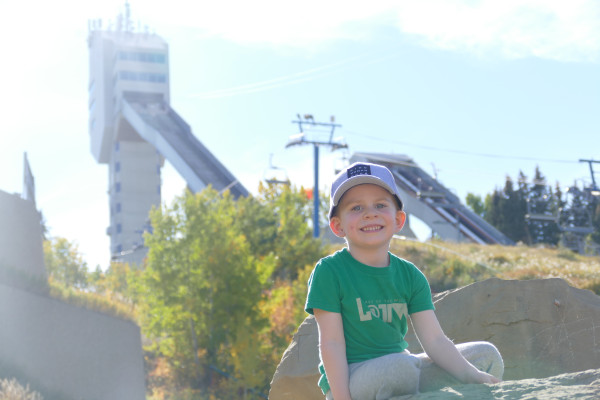 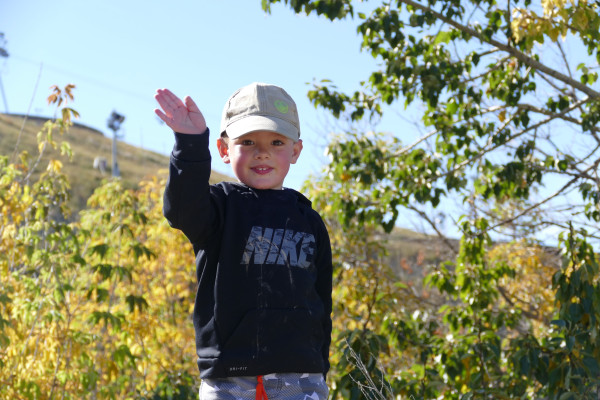