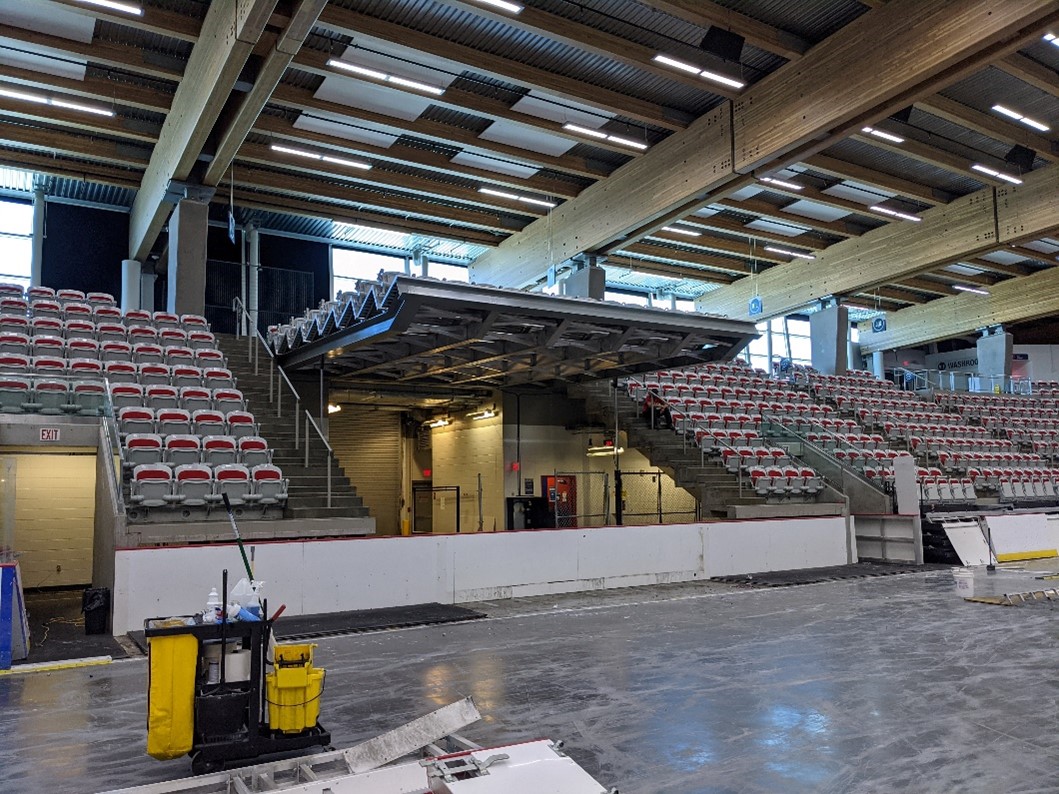 At its peak, the arenas at WinSport are among the busiest in the country.

The four ice sheets at Canada Olympic Park are key venues for Hockey Canada teams and programs; the home to one of Canada’s largest adult hockey leagues; and critical to the development and support of grassroots hockey, ringette, sledge hockey, figure skating and learn to skate programs. 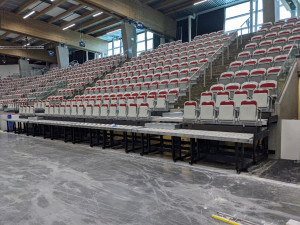 eat WinSport Arena is a go-to venue for trade shows, concerts, and other large-scale events.

The WinSport Arena is also unique compared with nearly all other Alberta ice rinks with the ability to convert between international and National Hockey League size. When the Scotiabank Saddledome was opened in 1983, it was the first North American arena built to convert to the larger international size.

When WinSport’s ice sheets were opened in late 2010 and early 2011, Arena A, or the WinSport Arena as it is known now, was set to NHL size at approximately 200 feet by 85 feet. When our partners at Hockey Canada moved into the building and the complex became critical to their programs about a year later, it was converted to international size of about 200 feet by 100 feet.

It remained at that size until early June of this year when it was converted back to NHL size. This proved to be no easy task. While our WinSport team has plenty of experience removing the glass and putting down the deck to use the arena space for events, the conversion process was something entirely new. 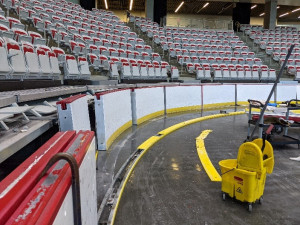 None of our current Team Members helped with the conversation when it was reconfigured to international size in about 2012, so we had to do plenty of research to make sure we were skilled enough to understand the process. We took a couple of weeks walking around the outside of the boards, gauging what was required and trying to guess how long it would take to complete the changeover.

We guessed it would take about three weeks and we are happy to report it took about 20 days, with a small team of four or five at a time working on it about 14 hours a day, and while juggling ice sessions on our other three rinks. We've all watched the time-lapse videos of crews switching an NHL arena over to a National Basketball Association hardcourt with a huge team of 30-plus workers making the conversation look easy. This process certainly wasn’t as quick.

Our project timeline included the time it took to remove the ice and make new ice. Fortunately, we faced only minor challenges along the way and surprisingly bolts and threaded inserts in the concrete weren’t overly rusted despite having been in place and submerged in ice and water for almost a decade.

The first step was to remove the ice and scrub down the floor, which essentially was two days of work. We contemplated whether we were able to just shave off the outside ring of the ice and rebuild it afterward, but then it occurred to us that the ice markings are different between NHL and international, with goal-line moving, the neutral zone six feet longer in international hockey and the faceoff circles would have to be moved as well. Removing the ice took about a day and a half, including the clean-up.

Next, we would typically remove all the glass, but due to the lengthy Curling Canada bubble of events held at the arena from February through May, the glass was already out. 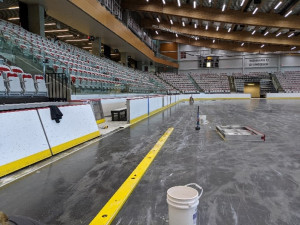 Dismantling the board system was the most time-consuming and difficult. It started with unbolting all the eight-foot board sections which are held together by two bolts on each side. Each section then had to be unbolted from the pad and the ice dam. The ice dam is about two inches tall and sits on the arena floor, with the boards sitting on top of the dam.

The ice dam then had to be moved inwards approximately 6 ½ feet on both sides, lining up with the pre-threaded holes in the floor.

The big challenge was lining it all up. It seemed easy, but we had to rebuild one corner 3 times. After we put it together, we found that the gates weren’t closing properly on one side and there was a two-inch gap on the other side. We had to do some manipulation to make it fit. There was lots of play in which the ice dam could be placed, and the threaded inserts weren’t always perfectly lined up. Now that we understand how much play exists and where we need to place the ice dam, future conversions will be much more seamless.

The other big task was bringing in the extra stands. Our team had to dismantle the players’ boxes and penalty boxes in their entirety and move them out of the way so we could put these additional seating sections into place. We then had to return the players’ and penalty boxes in front of the newly installed seating sections, about 6.5 feet ahead of where the boxes use to be. c

The stands on the north side of the arena are equipped with an ‘elephant gate’ or a large section with a built-in hydraulic lift so that it can be lifted to bring in big equipment. In this case, it was lifted to bring in the large seating sections to be placed behind the players' benches and penalty box area.

The remainder of the seating sections that aren’t behind the benches and penalty boxes are retractable, so we were able to just pull them out from under the existing stands.

After reconstructing the players’ benches and penalty boxes, some electrical, including the power and signal wires for the timekeepers’ score clock and the stereo system had to be moved since the boards were moved 6.5 feet. Before proceeding to the glass installation, we had to ensure the boards were lined up and the gates were flush.

Reinstalling the glass is something our team is used to, so it took between five and six hours using two forklifts to complete. We then had to move the safety netting behind each end and ensure they matched the contouring of the corners. There are two rails for the netting to hang from suspended in the ceiling, one for IIHF ice size and one for NHL. We simply moved the netting from the IIHF rail to the NHL rail.

The final piece to complete the stands was covering about a four-inch gap along the boards that are filled by installing an L-bracket that is bolted onto the backside of the boards, with a six-inch-wide diamond plate added to cover the gap and make it look complete.

Before building the ice and stringing out the lines in the ice, the coloured puck boards with the bluelines and goal lines had to be moved to their new locations on the side of the boards. After a week of building ice, we were ready for action.

There are pros and cons to each configuration depending on the user group or the requirements of the rink, but it certainly is a benefit to have that flexibility.

Beginning on December 18th, the team hit the rewind button and is doing some reverse engineering, with the ice being converted back to international size. The process will take until early in the new year, but will provide plenty of flexibility, especially with events such as the Basketball Champions League Of Americas event in March and an Alice Cooper concert in April.