Home / Blog / Konopaki practices what she preaches: Be authentic!

Konopaki practices what she preaches: Be authentic! 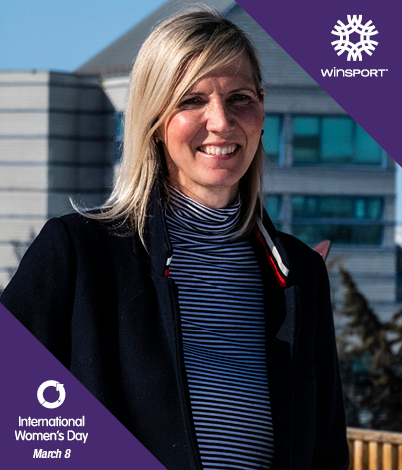 Part 3 of a six-part series profiling the Women of WinSport, in recognition of International Women’s Day on March 8th and the impact women have made on WinSport.

Jennifer Konopaki knows first-hand what it is like to be the odd man out … or in her case, the odd woman out.

During the early part of her job as WinSport’s Director, Active Lives, was representing the organization at regular meetings. Because these meetings were with a male-dominated group, she started to wear collared shirts to the sessions. It wasn’t until her sister asked why she was dressing like a man that she realized that she wasn’t being authentic and that deep down, she wasn’t even aware that she was trying fit in.

In Jennifer’s case, that went against one of the major lessons she learned from her mentor, Cynthia Watson, about being a female leader. Jennifer worked for Cynthia at the Talisman Centre (now Repsol) and now Cynthia is the CEO – chief evolution officer – at Vivo Recreation Centre. She taught Jennifer the importance of being authentic.

“A younger version of myself struggled with consistently being the only woman in the room. Over the years, it became normal, and I became much more comfortable in that space,” says Jennifer, who has been with WinSport for eight years. “But I had to, over the years, mature, develop and grow to overcome that. It’s not a disadvantage. It can be an advantage, especially in a male-dominated sporting environment. I learned that from Cynthia years ago that there should equal representation at the table. That makes for a good team, and that makes for broad thinking.”

Back in 2002, Jennifer worked in the field for a few oil and gas companies as an oilfield crew supervisor. During her stint in Northern Alberta, not only were she and her sister the only women, she was not accepted and to say she was ridiculed would be an understatement. In a very short period, she earned others respect, learned a great deal about leadership and ended up being the boss responsible for setting the pace and the team’s safety and performance.

“You have to dig deep and know what you are capable of,” says Jennifer, who was recently elevated to the role of Executive Director of Sport. “You have to make your way at times. Honesty, it comes through the strength of character and knowing yourself. It’s about believing in yourself sometimes when nobody else does. That’s just part of the journey.”

Jennifer’s journey certainly started down the right path thanks to the mentorship of many wonderful women and men, who provided her with rich leadership opportunities along the way.