Davies proves she has the right stuff for millwright role 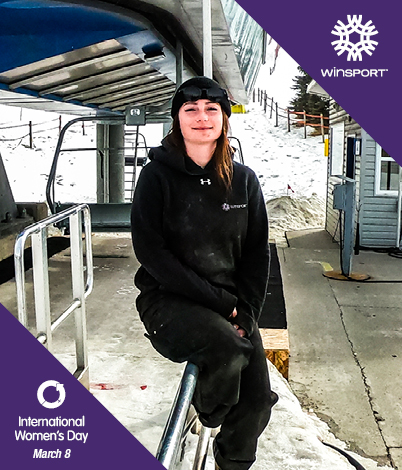 Part 4 of a six-part series profiling the Women of WinSport, in recognition of International Women’s Day on March 8th and the impact women have made on WinSport.

Taylor Davies knew somehow her career would take her in a direction where coveralls were the uniform of choice. She also knew she would likely end up in a male-dominated field.

“I’ve always had male-dominated interests, like snowboarding, mechanics and anything else really,” says Taylor, who is a first-year industrial mechanic (millwright) apprentice at WinSport. “I always was considering a trade, but I wasn’t really sure which one. I kind of bounced between mechanics and instrumentation and heavy-duty mechanics. I was pretty indecisive, and the opportunity came up for a millwright position, so that’s what I went with.”

Taylor is among WinSport’s 140 full-time staff, of which 39% are women. Prior to joining the organization, she was with an irrigation company installing residential and commercial irrigation systems.

“I have always had an interest using tools or working with my hands or any kind of mechanical job. I’ve always been relatively good at it, as well,” says Taylor.

She says she has never had difficultly fitting in with a mostly male crew. She’s the only female among five chairlift mechanics and a handful of women with the operations team at WinSport.

“I don’t take offence to a lot of things. If I am treated differently, I will prove otherwise,” says Taylor. “All the men I work with now treat me just like any other person. The fact that I am female doesn’t change anything.”

Taylor says her mom Janine has always been an inspiration to her. She’s also a hard worker, isn’t intimidated by anything and will jump into just about anything. And that’s the same message Taylor would have for any women looking to follow in her footsteps.

“Don’t let the fact that you are a female hold you back. Don’t let anyone tell you there is something wrong with it, because it’s not true,” says Taylor. “I think the trades could use a lot more females in it. We have the organizational skills and the determination that’s suitable for the trades.