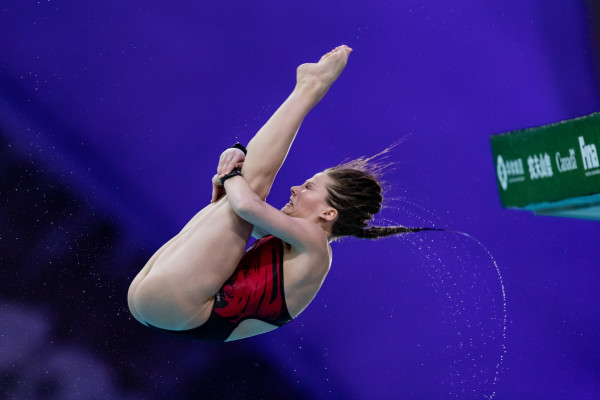 Like many other young athletes, Caeli McKay was at a crossroads.

High school was on the horizon and her training and competing as an up-and-coming diver was becoming more intense.

"At that point was where my career started to change from taking diving as just a sport to see how far I could go to start to take it seriously,” says McKay, who is heading to Tokyo to represent Canada at the Summer Olympic Games. “I started training at 12:30 p.m. most of the week. At one point I was at a regular middle school and doing online classes while going to the school at the same time, so it didn't add up.”

Along came the National Sport School, the perfect option for student-athletes like McKay, who started Grade 10 at the school in 2014.

"At the NSS, it was a lot easier for me to have the courses that I wanted and have it manageable so I could leave at 11:30, do the commute to the pool and still manage with my school and stay on track.”

“It’s a great opportunity for athletes to have some flexibility instead of having to choose one or the other -- school or sport,” says McKay, who turns 22 years old on June 25. “In sport, you only have a certain period of your life that you can do it and perfect it and get to an Olympic level. For school, you can do it for a bit longer and if you have the right management of it, you can do both at the same time.”

McKay, who remained at the school until 2016 until she moved to Montreal to be with the national team, says the school was a game-changer when it came to her education. She ultimately graduated through another online program while in Montreal.

“The biggest contributing factor was that the teachers were very easy to deal with and good with managing athletes that had different schedules. It was easy to work around it and still get the same amount of work done, just at a different pace,” she says. “I would blitz on my work on the weekend so that during the week I didn't have as much homework. That was a huge factor for me.

"Just the flexibility of the whole school was just really appealing to me and my lifestyle, and it helped out in the end. I don't know if I would have graduated if I hadn't started with NSS.”

“Calgary has a lot of amazing facilities, and WinSport and NSS facilitate all athletes. Of course, people think that it’s more of a winter school because of the ski hill that’s right there and how easy it is to accommodate skiers and lugers and those kinds of athletes, but we have swimming facilities and other facilities (in Calgary),” she says. “I had quite a few friends that were summer athletes as well and I know that there have been many alumni from NSS that did make it to the Olympics in the summer. I hope people can know the NSS is for all sports and not just winter sports.”

Since the inception of the NSS, more than 60 alumni have competed at the Winter or Summer Olympics or Paralympics. McKay is one of three confirmed alumni competing in Tokyo at the Olympic or Paralympic Games (a fourth may be named to the team on June 28). She has qualified for the Games with partner Meaghan Benfeito in the 10-metre synchro event. She’ll be vying for an individual spot in the 10m platform event at the Olympic Trials, which begin June 29 in Toronto.

She first started dreaming of becoming an Olympian when she watched the Athens Summer Olympics in 2004 when she was just five years old.

The pandemic has thrown her sport, as it has all others, into a tailspin. At one point in 2020, she wasn’t able to train in the pool for more than three months. It was the longest she’s ever been away from the pool.

“The biggest thing that affected us is that we didn’t compete for so long internationally. It was cool to get back to the World Cup about a month and a half ago to actually compete with all our competitors face-to-face,” she says. “We were doing a couple of virtual competitions, which were weird and didn't fit our preferences of competition. We train to compete, we don't just train to train. We want to perfect our sport, but in the end, it's the competition we work for."

While last spring’s uncertainty of whether the Tokyo Olympics would ever take place weighed on all athletes, McKay took it in stride and did the best she could to get through it.

“The extra year has been marvelous for me. I have been able to put in more work and learn a lot more this year,” says McKay. “I did learn a lot more about myself in the pandemic year, just as an athlete -- at home, how I train, how my brain is, how to work better mentally and appreciate everything a bit more. So this whole extra year has been a blessing in disguise, I would say.”

Once the Olympics are over, McKay is planning to enroll in some post-secondary classes in Montreal in hopes of earning her degree in psychology. She’ll once again be balancing schoolwork with training as she has her eyes set on the 2024 Summer Games in Paris.