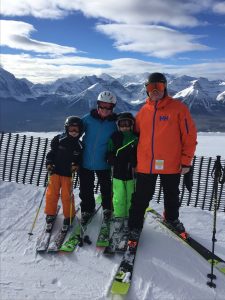 Sport plays an important role in the Seitz family, whether it is in the dead of winter or the dog days of summer.

Tyler and Krista Seitz ensure that their two boys – Henry (13) and Charlie (11) – are kept busy trying a variety of sports, supporting them in whatever they do. That support is something both Tyler and Krista received when they were athletes.

“Because we came from such a sports background and got into the high-performance thing, we saw a lot of different parental attitudes toward sports,” says Tyler. “That shaped how we wanted to bring our kids up in sports.”

Tyler and Krista are among the millions of parents across the country that are being celebrated as part of the fourth annual Parents in Sport Week, which runs from Oct. 5-11. The week is focused on honouring those parents who play an essential role in supporting children in sport and activity.

“Sport plays an important role in many aspects of our lives.” Says Krista. “It provides Henry and Charlie an opportunity to expend some energy, compete and have fun with their peers! We also find sports are a fun way to spend time as a family.”

WinSport is a huge supporter of parents in sport. Every day the important role that parents play in supporting their kids in sport or other activities is evident in our arenas, on our hill and in our programs. The support is not only about paying registration fees and providing equipment, it’s also about driving to and from practices and games, providing snacks, organizing tournaments and providing emotional support.

Both Henry and Charlie have played a variety of sports over the years – from skiing, hockey and luge to baseball and rowing, to name a few. Next summer, their parents are hoping to introduce them to golf.

Henry’s main sport is baseball, but after a rowing camp this summer, he has continued to enjoy making waves in the water. Charlie’s first love is hockey and after playing house league hockey, he has joined the community ranks. While they may go their separate ways at some points during the year, the ski hill is where they get their most family time.

“We enjoy skiing as a family, and that is a focus in the wintertime,” says Tyler. “They both did three years in WinSport’s alpine Academy club. They did some racing and got some strong fundamentals out of that. They can ski anywhere on any mountain now. They both decided it was better to spend some time on the hill with the family.”

“We don’t push them into anything,” says Tyler. “We like to have them explore sport and find the things they want to do.”

Parental support was critical to both Tyler and Krista’s involvement in sport.

Tyler’s dad was a big hockey guy, unfortunately, he passed away before Tyler made his mark in luge.

“It was always fun playing hockey and having him around,” says Tyler. “He always wanted me to do my best. He pushed me to give 110% all the time. He thought you are there for a reason, to push yourself. I never felt the pressure. It was more an internal type thing of ‘do this for yourself’ .”

“My mom carried that on during my luge career and she always supported me 100%. Being a single mom, it was quite expensive. Financially and morally, they were always behind us. Never with a pointy stick.”

It was much the same for Krista.

“As a kid in sport, I appreciated my parents’ approach. They were my biggest fans, but they respected that the coaches had the technical details covered,” she says. “They participated by volunteering at the races and bingos but stayed out of the political roles when I was at a competitive level. As a coach, I appreciated the parents who did the same. As a parent, I hope to do the same.”

As for advice for parents: “Encourage sport and encourage competitiveness, but without the pressure. Listen more than tell,” says Tyler.

Parents in Sport Week is the brainchild of the Child Protection in Sport Unit (CPSU) in the United Kingdom. It celebrates all the parents who help to make youth sport possible by registering their children for programs, driving them to practices and games, providing unconditional support, and more.